Blog: "No Civil Liberties Will Be Unjustly Denied"

It takes willingness and collaboration to begin undoing generations of voter disenfranchisement.  As an ACLU of Wisconsin’s Rights for All Campaign regional organizer in Eau Claire County, I had the privilege of seeing these principles at work when the Rights for All Campaign connected with Captain Dave Riewestahl, of  the Eau Claire County Sheriff’s Department and an Army veteran, and Karen Voss of Chippewa Valley Votes, an electoral advocacy organization in western Wisconsin. Our shared objective was to see civil liberties expand in the carceral setting, because in Wisconsin, people serving misdemeanor jail sentences, or who are awaiting trial, are eligible to vote, and they are allowed to vote absentee by mail if they are unable to vote in person.

“The vote is the most powerful non-violent tool we have.” This quote by John Lewis speaks true to the heart of our American democracy.  Yet we have generations of people who are being denied access to electoral engagement. , “It wasn’t until the end of the Civil War and the expansion of suffrage to Black men that felony disenfranchisement became a significant barrier to U.S. ballot boxes,” according to the Brennan Center for Justice. Political socialization, the process by which a person forms their political identity, is greatly hindered when lawmaker’s actions place nearly insurmountable barriers between individuals and the ballot box.  This suppression and disenfranchisement disproportionately target People of Color and poorer communities. 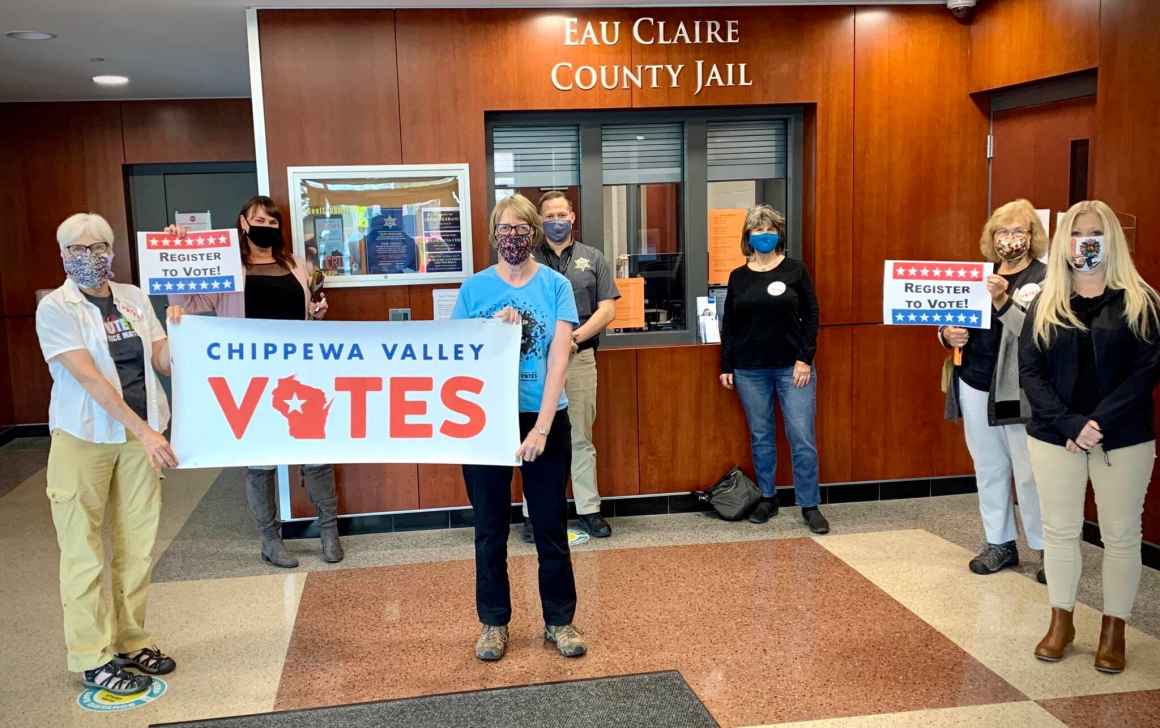 In June, the ACLU of Wisconsin’s Jail Voting Report was sent to every county sheriff’s department in Wisconsin .  Rights for All-Eau Claire County re-sent this information to jail administrators in the Chippewa Valley in August.  That month, I gave a virtual presentation to the Eau Claire County Judiciary and Law Enforcement Committee detailing the steps that we could take to provide effective access to the ballot in jail.  It was at this presentation that Chippewa Valley Votes became aware of this initiative and asked if they could help lead this critical work.  Captain Riewestahl, who had already shown dedication to expanding ballot access to people in  jail, met with Karen Voss and I to discuss how to move forward with making this voter registration and absentee ballot request opportunity happen.

Weeks before the event, Captain Riewestahl worked with their technology vendor, and together they collaborated on how informative voting content could be shared with the incarcerated population via the electronic cellblock kiosks.  Having a voter registration and absentee ballot event without access to candidate information would have been ineffectual, which is exactly the appropriate word to describe most other Wisconsin county jail’s voting procedures.  Kenosha County was the only county in Wisconsin at the beginning of the year that submitted a relatively detailed voting policy that was already in effect after 61 of the 72 counties in Wisconsin replied to the ACLU of Wisconsin’s public records request for this information.  52.5 percent of these 61 counties had no identified voting process, and 45.9 percent had insufficient and vague language denoting an impracticable jail voting process.

Many important lessons were learned in carrying out this event.  Chippewa Valley Votes representatives and volunteers, bearing their laptops and procedural knowledge on how to register voters and request absentee ballots, entered the jail, and used the attorney visitation rooms—small booths with Plexiglas separating the voters from the volunteers—to carry out this initiative.  Karen Voss, leading the Chippewa Valley Votes group, stated that the largest barrier to eligible voters in the Eau Claire County Jail was lack of approved voter identification that the people currently held in jail could access.  Captain Riewestahl echoed Ms. Voss’s observation.  Efforts had been employed earlier in this process to mitigate this hurdle by allowing eligible voters to have a family member bring in their identification to be scanned and stored with the jail’s re-entry social worker.

Voting is a right that is being denied to a substantial portion of approximately 12,500 individuals incarcerated in county jails in Wisconsin.  To build off the work that was accomplished in Eau Claire County, and across Wisconsin this election cycle, there are two long-term steps that would expand access to the ballot for eligible incarcerated voters:

1.  Amend Wisconsin’s voter ID legislation to allow jails to print a valid form of voter identification for incarcerated eligible voters.Or as Captain Riewestahl so pointedly stated, “We know beyond a doubt who we have in our jails.”

2.  Change the language of Wis. Stat. 6.86 (3), the statute granting authority to the Wisconsin Elections Commission’s “Hospitalized Elector” protocol. This protocol allows those who are indefinitely confined due to illness to receive their absentee ballot and have it returned by a designated courier.  If you have doubts about how practical this would be, it was implemented on the University of Wisconsin-Eau Claire’s campus for those students with COVID-19 who were quarantined in their dorm rooms. The same process could easily be carried out for those individuals in county jails—a remedy brought to our attention by Captain Riewestahl.

Through collaboration and willingness, we took a major step in ensuring no civil liberties will be unjustly denied in Eau Claire County.  But it does not end here.  Take a look at the ACLU of Wisconsin’s Jail Voting Toolkit to understand the issue and how people in your community can work with your local sheriff’s department to make voting accessible to eligible incarcerated populations.  Contact the ACLU of Wisconsin if you need help with this process. Thank you for being defenders of civil liberties!