Battling the School-to-Prison Pipeline in Oshkosh 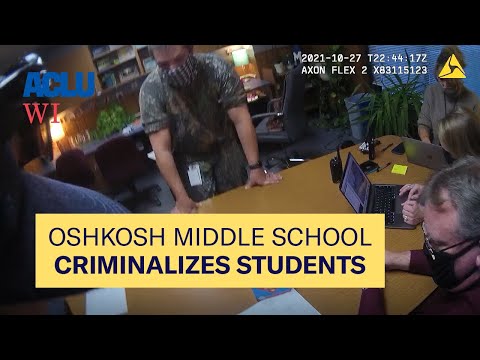 When Black and biracial students faced racial harassment and disparate punishment in the Oshkosh Area School District (OASD), the ACLU of Wisconsin took the case to the U.S. Department of Education's Office of Civil Rights (OCR).

The mother of two Black siblings who attend Merrill Middle School reported racial harassment to school administrators, only for them to ignore the claims and fail to investigate.

One of the siblings is a seventh-grade boy who reported experiencing racially disparate punishment at OASD schools since he was in Kindergarten, sometimes for minor things such as putting his head on his desk. His sixth-grade sister also experienced persistent racial harassment, and was targeted by a student who she says harassed her daily, and called her the n-word.

At the Halloween dance at Merrill Middle School, a white student with a history of alleged racial bullying (see previous) instigated a conflict with a group of Black and biracial students by throwing water on them and calling them racial slurs.

Black and biracial students involved in the Halloween dance incident were expelled, while the white student went unpunished. In one seventh grader's expulsion hearing, the school board official overseeing the hearing said that the racial harassment that occurred was ‘not relevant.’

The ACLU of Wisconsin filed a complaint with the U.S. Department of Education's Office of Civil Rights on behalf of the siblings' mother, asking them to investigate OASD.

Six reasons to keep I-94 at six lanes

Celebrating our successes in 2022

From the Death Penalty to Marijuana, Clemency is a Tool For Justice

Wisconsin Judge Dismisses Case Aiming to Out Transgender and...